The 2013 WSOP Schedule was posted this week.  In spite of various hoopla surrounding it's release, the schedule more or less looks the same as every other year.  There have been some mild changes: continuing move from $10k World Championships to $5k, more re-entries, more 6-max NLHE to name a few, but generally its the same shit with different dates.  I am planning on two separate trips out.  The first week-10 days will likely cover this period:

My plan at the moment is to focus more on cash games this year I think.  My expectation is to play mostly 5/5 and 5/10 PLO  with perhaps some 5/5 and 5/10 Big O sprinkled in.  We shall see as the time gets closer but that is the plan.

My second trip will probably wrap around the Main Event in some way and might include the "Little One for One Drop" which is a low buy-in offering similar to last year's $1M event.

The Main is a question mark as I may have someone willing to take a good bit of my action.  Reality is it will depend in large part on my results in trip #1.
Posted by Brian at 2:52 PM No comments:

Haven't posted in over a month.  The last few weeks have been pretty active for me.  I was at Delaware Park twice for the Winter Series, at Borgata twice for the Borgata Winter Open, did a quick weekend ski trip with the family; all while living and dying with the Ravens through the Super Bowl run.  Oh and we put a contract down on a new house that will have ample space for me to have a 2 table poker room with big screen TVs, etc.  Should be pretty cool assuming we can sell our current house. 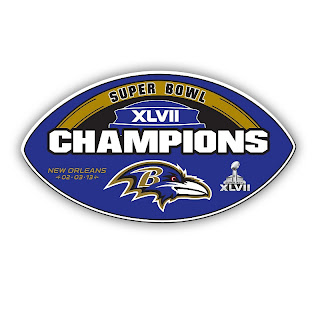 The Ravens run was really sweet...I literally busted the DE Park Main Event ($1k) as the ball was sailing through the uprights in that second overtime vs. Denver.  I remember pretty vividly the run in 2000 but this run was sweeter as I enjoyed it with my wife and kids.  They all got really into it this year after years of near misses and shoulda wons it just was a lot of fun.  I even took the kids out of school on Tuesday to go the parade and party at the stadium.  Place was fucking nuts. 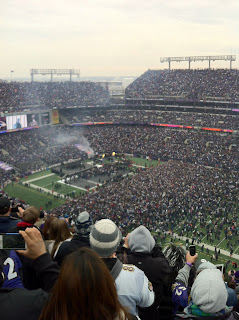 Poker wise January was decidedly meh...started off pretty well but I bricked all the high buy in tournaments at Borgata and the DE Park Main.  Thankfully the cash games at Borgata were pretty off the hook and I was able to finish January with a slightly positive win for the month (less than $2k).  I also finished runner up in a $150 buy in (lol) PLO/NLHE split event at DE Park.  I went up sort of on a last minute whim at about 2:30 one Monday afternoon (started at 4) mostly because I was bored and figured I would bust quickly but hopefully a 2-5 or 5-5 PLO game would break out.  8.5 hours later I was heads-up with a competent player and didn't really play that well heads-up ultimately getting A5s all in pre vs. his A9 after 80 or 90 mins of heads-up play.

I think his range is still pretty wide here and includes flopped pair maybe with a or possibly a bare high like Qx or even a straight draw.

Villain checks. I feel like he will make a play at this pot a lot if I induce so I bet 65k. Villain tanks then c/r to 175k leaving about 440k behind. If I call there will be 520k in the pot.

I end up calling to keep whatever bluff range he has in the hand.

So that sucked but whatever, I thought through the hand pretty well and just got 5 outed for what would have been a huge chip lead.  Obviously if I see his exact hand I probably try and get it in on the turn.

Borgata meanwhile was an absolute shit show.  Huge fields, chips flying...was a good scene.  I busted all the tournaments I played.  Only noteworthy ones were the PLO when I lost a massive pot with AKQ9 vs 3367 on a QQ3 flop and the Main Event where I busted the last hand of day 1 with AA vs 77 on a JT7 flop in a 3 bet pot.  I actually hated the flop and could have folded to his flop raise rather easily but just didn't do it.  Cash games at Borgata were insane.  I was up over $5k playing mostly 2/5 PLO and 2/5 NLHE.  This in spite of the fact that I played 6 $2k+ pots in the first 2 days of my trip and won exactly 1 of them.  But once I dug out of that hole I ran pretty pure and booked a nice profit for the series.

February will entail a lot less poker and more tax returns though I may try and sneak out to Charles Town for some PLO action in the next few weeks.