So Wednesday night I wasn't really planning on going to MD Live but I had met a particularly crazy work deadline on Monday and just decided last minute to head down. Good thing I did as the session resulted in my biggest 2/5 session. 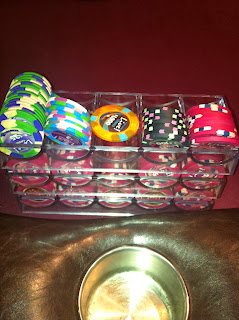 One of the things I have noticed more and more as I approach 1k hours since I committed to live poker is how poorly most live players adapt to image. The weird thing is you can fold and fold for hours on end then get a big hand and its as if they never notice. Conversely, if you play a ton of hands, particularly aggressively, and some players suddenly decide they are going to be sherriff's and rein your aggression in. On Wednesday night I was fortunate to have a good rush of cards right after I sat. I was 3b and opening a TON of pots. A few of the live-fish, of course, "adjusted" by playing and two cards against me (in fact I lost a pretty good sized pot to 23o vs my TT on a 945J6 board calling my all in turn c/r). One player, in particular, decided he was going to "show me who was boss". I had already seen him jam $300 into a $75 with A

telling the guy afterward that he didn't want him to draw out.

Anyway I obviously had to adjust to this cat by realizing he is "gunning" for me. Played 3 hands with him and he emptied the clip on 2 of them.Your Ace is good sirVillain opens to $20 in MP, I call BTN with 77 and we go 4 to the flop. Flop is Q97r. Villain leads $50, I raise to $150 and he calls rather quickly. Turn is A and he open ships ~$750 into the $380-ish pot. I snap call and river is a complete brick. He then says "Your Ace is good sir". I'm sorry huh? How do I have an A here? I guess maybe AQ is possible. Anyway I am guessing he had KQ or perhaps JT??At this point my man is on raging tilt though he is trying to pretend like he isn't. He reloads for $500. 30 mins later the next hand happens.You fold top pair?So I open Q

Checks to me and I c-bet 60. Mr. Tilty now check-raises to 160 with 400-ish behind. For some reason, I just read him for strong. I think he has a ton of semi-bluffs in his range but he also has some made hands and better Q's too. This is really a pretty easy bet/fold spot most of the time but given this guys tilt I'm just not sure.
This is probably too strong a range for Uncle Tilty but coupled with the fact that I just read him as strong and I can't really take a lot of heat on turn and river I opt to give up and fold. I also really think I will have a shot at his stack at some point with a more nutted holding (hate this type of thinking but meh what can I say). I opt to show him the Q thinking it will make him feel that he can run me over and give him a chance to puff out his chest and feel over confident. He is shocked that I folded but doesn't show.Any other opinions on this hand?You're too goodFinally, less than 2 orbits later I get him to stack off and end his night early. I open A

I decide he will 100% jam if I check and I'm simply not going to fold to this cat. So I check and on cue he rips it. Only way I am beat here is if he has like 56s or 45s type of hand where he floated flop with middle pair and picked up turn outs. But I'm just not folding TPTK to this dude so I snap and he tables 24o for a flopped OESD-rivered pair. He laughs like I made some dumb call and says "all that with one pair? I guess you're just too good for me" sarcastically. I just flip the dealer a couple of bucks and start stacking. No reason to engage these monkeys.Played a few more hours and ended up $2,765 over a 4 1/2 hour session. Not a bad hourly

.Since June I am up ~$8,100 over a paltry 160 hours. Really need to up my time through the end of the year. Going to set a goal of 250 hours played through the remainder of the year. I have one more big work deadline on October 15 but other than that should be able to commit to these time goals.As far as 5/10 and 5/5 PLO go, I had to use some of my poker BR for real life stuff as we are in the process of moving. This has caused me to be a bit more conscience of variance and, thus, with the softness of 2/5 I just think grinding it makes more sense ATM. I will still play a few sessions through the end of the year just for the immediate future going to stick to the small games 2/5 NLHE and 2/2 PLO.
Posted by Brian at 1:41 PM 4 comments:

Hadn't been playing a ton of the pokerz as I was recovering from the surgery I had exactly a month ago and once I got the clearance from the doctor I have been playing a lot of golf. I used to play at a pretty competitive level but after 20+ years of grinding the driving range, etc. poker has been more interesting to me the last few years. But slowly the desire to play high level golf is building. The MD Amateur is at my home club next June so I think I am going to make a run to get my game and my body in shape for playing a full schedule next summer. For now though, my golf game is in shambles. Just starting working with the director of instruction at the Caves Valley Learning Center. It has to be one of the nicest practice facilities in the country. I've been to a lot of the best clubs in the country and there aren't many practice facilities that stack up to it. Anyway, as that progresses I may orient this to detail that process if there is any interest.

On to the poker. MD Live opened with great fanfare 2 weeks ago and has proven to be a huge hit. Tables are running around the clock in NLHE and PLO and other games/limits at busy times. I have been 3 times and found the action to be very good. I have played 1 session of 2/2 PLO and 2 sessions of 2/5 NLHE. While the PLO is slightly higher hourly winrate expectations (long term) it comes with higher variance (short term). So for the moment, reduced variance is the way I am going. Here are a couple of fun hands where maybe I didn't play super well and one where a fishy reg made a head scratcher play.

Sometimes the Fish gets there

from the SB. Not the greatest hand but 3 connected cards, 2 broadway cards, a suited A; all seems good enough to call. 7 to flop.

and I say "Nuts"; turn over my hand to reveal A

Oops misread that by a lot...lol. Anyway I was good and he was not happy. Was obvious that I just f-ed up though.

to $25 in LP over a fishy limper. BB calls and limper folds. BB is ok-ish reg that I have played with before.

He checks and I c-bet $35. When he calls I am not continuing here with anything much on the turn. I range him on A

or perhaps AT, QTs, etc.

Hmmm change of plans now that we are open ended and appear to have picked up some equity. He checks and I decide to bet here as it is starting to look like he has a one pair type hand or perhaps a draw. I decide on $70. Obviously I am bet/folding if he c/r the turn so I don't think betting more makes much sense. He reluctantly calls.

Welp that is a good card!

He checks again and I think his range is completely capped at 1 pair with some bricked draws mixed in. He is obviously not calling if he missed his draw. But we 100% have the best hand so need to get some value. I think about it and decide on $125. He calls after some hemming and hawing and is shocked to see my hand.

. Claims he had QQ but I don't believe that. Maybe JJ, JT, AT, etc. In any event, his river call is pretty bad but I'll take it.

One thing I have learned over my 600ish hours of 2/5 is that 2/5 regs are arguably the worst subset of poker players (this is obviously just a generality) . 1/2 regs are just really bad, weak passive players with poor fundamentals. 5/T regs are better in the sense that they are at least ranging opponents and are more aggressive. But 2/5 regs are the pits generally. They think they know WTF is going on and have more knowledge than a 1/2 player but just misapply concepts and strategy seemingly every hand. Listening to hand analysis after a particularly big 2/5 pot develops is a fucking laugh riot.

I'm sure some think I make dumb plays but I at least have a reason for each action I take. It may be wrong and I may read a spot wrong but at least I am taking an action based on my read of the players and the situation.

Here is a funny one with a terrible, losing reg.

. I consider 3b here but we are only like $600 deep effective so I prefer to play a multi way pot hopefully. BB calls and we go 3 ways.

He bets $35 and only I call. I hate continuing on a paired board but I have 2 overs and a flush draw. And this reg will give up a lot on the turn and I can steal the pot even unimproved.

. I decide to call as I still think I will play the river better than him.

Hmmm the only hands this improved for him are A

or QQ. He checks after some hand wringing. I decide to take a stab even though I think my line is completely transparent to a better player. Frankly against a better player I doubt I bet here as I just don't rep very much. So I bet $160 and he starts talking. Literally 4 minute tank then he says $200 on top. I show him the T and say I guess you rivered Q's full trying to goad him into showing. I fold and he shows JJ.

So I just say "Nice hand". Then he starts saying "yeah I knew you had 99 or TT and knew you wouldn't call if I raised...actually was hoping you didn't call"...I'm sorry what??? Then why are you raising...lol. Then he starts in with more about how he knew I had either a bluff or a middle pair. OK fine but I'm clearly not calling those hands and you said yourself you don't want a call??? IDK I guess logic was in short supply at this table.

So for my 3 sessions at MD Live I have played ~17 hours as follows:

Probably back later this week for more.
Posted by Brian at 11:11 AM 2 comments: