Had to try and win this pot purely to show the SB who is a PLO8 regular....

For you non-Omaha players out there this hand can not improve. In other words, I have all of the K and can only use 2 of them. Must use 3 from the board so only way I am confident about this hand is the flop is AAA. Quads=No Good!
Posted by Brian at 10:27 PM 3 comments: 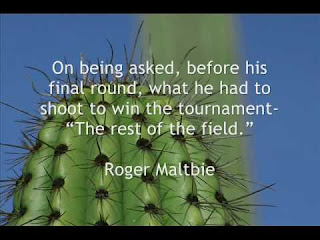 This quote pretty much says it all. Our club championship was this weekend and I flamed out with a rather pitiful whimper. I had actually started to play a bit better in the week or so leading up to the tournament and had played super solid in qualifying round #2 in the wind and rain. Then Friday I played so-so in winning my first round match on the 18th hole. My second round match was against a good friend of mine (he actually was my sponsor to get into the club) who had won the 4 club championships immediately preceeding our joining the club. I got off to a hideous start bogeying the first 3 holes and was 3 down right out of the gate. 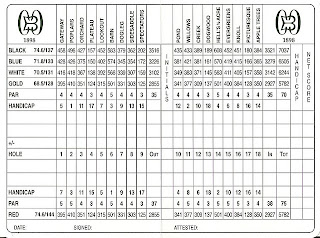 (we are playing the black tees obv)

Then hit it close of 4 and 5 and didn't even hit the hole with my birdie putts. His birdie on 6 and my subsequent bogeys on 9 and 11 made this thing a joke. Oh well...bad year for the golf game but with a lot of stuff going on with family, travel, work, poker, etc. I am not that worried about it. Like I said previously after 20 years of competitive golf perhaps a year off isn't the end of the world.

On the poker front things are going a lot better than golf. I have my on-line bankroll up over $1k in that little challenge I previously wrote about. I am back to playing exclusively PLO8 (hi-lo) at stakes up to and including .50/1.00. I may actually play 2 of the WCOOP events on Stars this week; the Tuesday PLHE/PLO and the Wednesday PLO8. They are both $320 buy-ins but I can use some of my frequent player points to buy in. I should finally make Supernova status on Stars this week. That will be worth some extra bonus cash as well as some other incentives that Stars provides.

I did not go to Borgata for the ME or other events. My kids weren't super excited for me to go away for a few nights again and, frankly, plunking down $3,500 for 1 event is not really a great bankroll move for me at this time. Playing some of the smaller events in the $300-$1k range is fine but the higher price events can be a bit of a strain particularly with 2 kids now in private school....ughhhh.

My WSOP league continues to go well as I finished 3rd this past Friday in the 3rd installment of the year long qualifying process. Currently I sit in 4th place though the top 4 are all basically within a few points of each other. Long way to go obviously but still nice to get off to a solid start.

I won a huge pot in my Thursday night cash game in Omaha Hi-Low with the monster hand that is 44T7 rainbow...lol. What a bad hand but I was in late position and got to see a cheap flop and the flop was 4xx. I made a bit of a hero call on the turn against a player who loves to play his draws super fast and when the river filled me up I snap called his shove as it made very little sense and I was right when I saw his cards flying into the muck before I had even released my chips. Normally I am folding bottom set pretty quickly in an Omaha game particularly when I have no low potential for back up. For example, I am probably not folding A244 on a 46x flop but would be quick to fold KJ44 on the same flop. The first hand is very strong holding while the second is really bad.

The Ravens stunk it up pretty bad yesterday but hopefully a dose of The Cleveland Browns should be the cure for that stinkbomb.
Posted by Brian at 11:12 AM 1 comment:

So far, No good

So far the BPO has been pretty crappy. I went up on Wednesday and played several events. This will be a quick recap of the goings on without my normal commentary on players:

My plan is to probably go back for the end of the series and attempt to satellite into the Main Event or just play some of the smaller buy-in events in the tournament.
Posted by Brian at 5:44 PM No comments:

The BPO starts next week and I am heading up on Wednesday morning. I will be playing the following events:

I come home for the weekend to play the BCC Club Championship Qualifier on Saturday and Sunday..then return to the B on Monday 9/13. I may just play the H/L on the 13th and then come home.

The Main Event is again a $3500 NLHE event that has 2 start dates Sat and Sunday Sept 18/19. Depending on how the above tournaments go I may go back for this. Most likely I will play Day 1B if this happens (Sunday 19) since Sundays will be a day when most of the young, aggressive internet players will be playing on-line and the field will likely be a little softer.

On-line is LOL...after my last post where I wrote about grinding $100 into a little over $900 my doomswitch was officially flipped by PokerStars and I proceeded to lose 12 buy-ins at $50NL (i.e. $600) in about 25,000 hands. In this stretch about half of the losses were situations where I ran under expected value (EV). All in EV (AIEV) is a variance figure that calculates what you should have won vs. what you actually won once you and an opponent are all in. For example, if I have AA and my opponent gets me all in holding KK, I should win ~80% of the time. If there is $100 in the pot then my AIEV is $80 meaning if this situation ran over and over I should expect to win $80 on average from this pot. If, in fact I win the full $100 then I am running $20 +EV. Conversely if he spikes a K and wins then I am running $80 -EV and I want to Punch a Clown. So back to the last week or so and I am running ~$300 -EV...good times indeed. I have recovered ~$100 in the last few nights, however, so whatever...just keep grinding.

You may note the blogs listed to the right...These are some of the better ones that I read. Here is the general background on each:

Anyway, check these out as they are worth a look.
Posted by Brian at 10:50 AM No comments: