Well if I am going to write about my run poo-poo I have to write about the flip side. The last 10 days or so I have been on the good side of variance as can be seen below. Although really the rungood is only confined to the last 3k hands or so. Again all of these hands are from FTP Rush. I have played less than 10k hands on Stars this month. 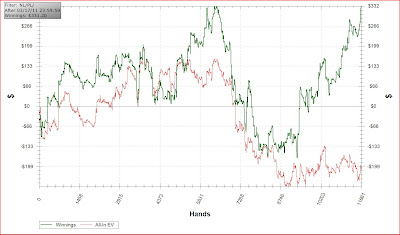 Due to all of this play on FTP I made their Black Card status sometime last week.

This gives me a few perks but nothing like the Supernova program on Stars. I think they are going to have some sort of VIP suite at the WSOP that my card will give me access to but I couldn't really care less about that as much as what it means to me $$$ wise. I am granted access to some cash bonuses as well through the status so whatever, better than nothing.

Finally, I played a bunch of MTT on Saturday night for the first time in quite a while. Nothing great happened as all I had was 2 min cashes on Stars. But I did have the always sexy rolled up Aces in the Stud portion of the FTP $75 HORSE event. Sadly this led to exactly nothing as I flamed out in the 20's and only 16 paid. 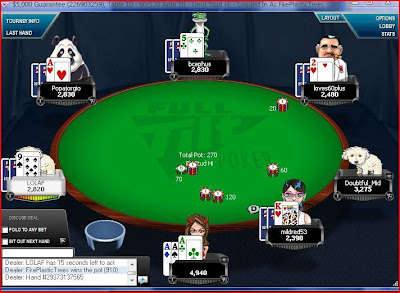 Run Bad is Back!

Just in case I thought I would have a nice easy, steady month of winnings reality has struck me in the face since I last posted my graph. Suddenly I can't win anything and I am running about 15 buy-ins below EV ($750). Pretty annoying (this is all FTP Rush poker again): 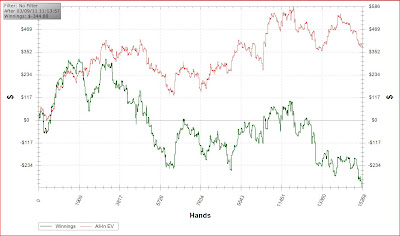 Doesn't really compare to the graphs I have seen from my boy Striker300 or other Omaha-8 regulars but generally those guys play a little higher stakes than I do. Nevertheless, running bad is pretty stressful. The reality of this game is that the edges are sooooooo small that you are constantly getting money in the middle in 40/60 to 60/40 type situations and running bad in those spots leads to shitty graphs like mine. Thank goodness for rakeback which is keeping me in the black for the month.

Last week of SNG has been whatever...not putting in a lot of volume so barely means anything.

Played zero tournaments over the last week due to my real life job interrupting my poker time. Another month of non-stop paperwork and tax filings...fun times.
Posted by Brian at 9:35 AM No comments:

My first steel wheel in 2011. Pretty good action turn card for the big fella no?

Well after my bitching and moaning about February, March has actually gotten off to a good start as can be seen below. 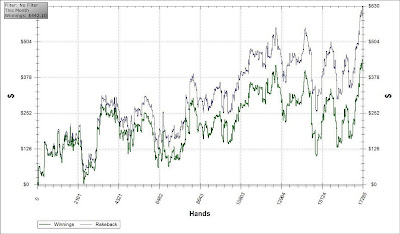 These results are entirely from Rush PLO8 on Full Tilt Poker. Unfortunately, the only offering for PLO8 in the Rush format is .25/.50 ($50 buy in). But being able to play 4 tables of Rush is probably the equivalent of playing 12-15 tables of normal ring games on Stars or Tilt and is much easier to manage since it can all be viewed on the screen rather than tables stacked on top of each other. I am also up about another $100 playing approximately 3k hands on Stars this month.

SNGs have also been pretty good so far this month. I am playing very low buy-ins since I am playing mostly 18 and 45 man turbo SNGs and don't really know what to expect in terms of variance. Get a few more under my belt and I will move up in stakes.

So with all of this going rather well that obviously means that MTTs have been a train wreck and that is accurate as I have 1 min-cash in the dozen or so tournaments I have played this month. Sunday was especially tough as I played a full schedule including the high buy-in "majors". None of the hands in those were especially interesting (losing coin-flips, etc.) but I did have a pretty good one in Full Tilt PLO on Sunday. This is just so ludicrous but would have given me a shitpot full of chips if I could have somehow held.

Not sure I have ever gotten it in 4 ways with 35% equity AND an added 1k+ in dead money from the callers and BB. That is usually a pretty good situation.
Posted by Brian at 10:47 PM No comments:

It is up here http://doubleflypoker.blogspot.com/
Posted by Brian at 11:02 AM No comments:

As I said last week February was my first overall losing month since last July. To be fair, I have had a few months where I was marginally profitable only because of rakeback/VIP rewards but was profitable nontheless. I didn't really play that much relative to other months so perhaps that had something to do with it.

Overall, my biggest area of concern is on-line cash games. Most of my play, of course, was in PLO8 but for the 3rd month in the last 6 I was a net loser in those games. At the stakes I am playing I feel like I should be winning more consistently. I had thought I was digging out of an early month brutal runbad stretch but then the last few days of February I played rather po0rly and got my ass handed to me. I know I have developed some leaks in my game but because it is such a close knit community of players I am really not sure who to turn to for an opinion. Additionally, there are nowhere near the resources available for PLO8 as there are for NLHE or PLO in the form of coaching, training videos, books, etc. So to some extent I feel like I have to figure it out on my own.

Tournaments were a debacle. As I said previously, FTOPS would go a long way in determining February and that proved correct as I bricked all 4 of the FTOPS events I entered. Fortunately I did win a lot of satellite $$ but not enough to overcome. I also ran/played pretty poorly on Stars playing mostly SNG. As hot as I ran in January playing the 18 mans (I ran at 30% ROI) I guess this was not unexpected.

Anyway here is the carnage:

All things considered not as bad as I thought it was going to be about 10 days ago. I won a small live tournament for $600 and beat the $1/$2 PLO game at Delaware Park for $500 in the last week and a half to salvage the month from a real disaster. But at the tables on-line I was obviously down nearly $1,800 and ~$800 of my "wins" came from rakeback/VIP rewards and that is not really what I am hoping to achieve.

March will not allow me to play as much due to real life demands of work. But April 15th will be here before we know it and then I can play a bit more and concern myself more with this downswing than poker downswings. 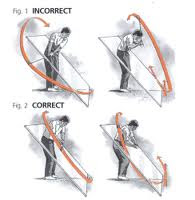