June was a good month in spite of essentially bricking WSOP Part 1. Here is the lowdown:

The on-line cash might be a bit worse since I played on several computers and feel like I am missing another $200-300 in losses. Most of this came from being on the wrong side of variance and maybe playing a bit higher than I should have while I was in Vegas.

Of course, since a lot this play was live I spent probably $1,500 or so on expenses (hotel, airfare, cabs, etc.). But if I could grind that out every month I guess I would be thrilled. I still have a small bit of money invested in some horses that are in the $5k PLO8 and the ME. At this point I haven't really done a full accounting of those investments to know where I stand.

I am heading back to the WSOP on Friday and will try to satellite into the Main Event. I am basically giving myself 2 shots to satellite in at which point I will simply move on and find other tournaments/games to play. if I get in great, if not whatever. But I am certainly channeling my inner Darvin...(if he can do it it gives us all hope)... 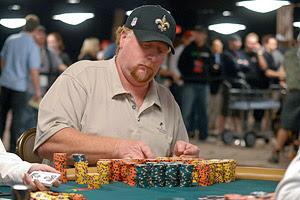